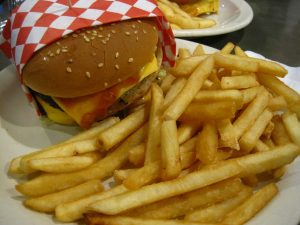 It’s common knowledge that fast food isn’t the most nutritious dining option, but you should at least be able to expect that the hamburger or chicken nuggets you are devouring are nontoxic. That may not be the case, say researchers at George Washington University. A new study published in the Journal of Exposure Science and Environmental Epidemiology has revealed that most of the food items at popular fast-food restaurants are full of chemicals known as phthalates that have been linked to a host of health problems. This is the first study to measure phthalates directly in fast food and contributes to the scientific evidence linking fast food consumption to higher levels of phthalates.

What Chemicals Did the Researchers Find?

Researchers at George Washington University bought 64 popular menu options from Burger King, Chipotle, Domino’s, McDonald’s, Pizza Hut, and Taco Bell and tested them for 8 common phthalates and 3 replacement plasticizers. 10 of the 11 chemicals were present at high levels in nearly all of the samples. 81% of the samples contained DnBP and 70% contained DEHP; both phthalates have been linked to fertility and reproductive issues as well as increased risks of behavioral, learning, and attention disorders in children. 86% of the samples contained DEHT, a plasticizer that is being used as a replacement for phthalates. Overall, samples that contained meat had significantly higher levels of phthalates than vegetarian options; but phthalates were still present in both types of food.