Imagine you’ve just gotten into your car. You turn it on and BOOM your airbag deploys for no reason. Or, your car hits a pothole, and BANG your airbag explodes from the steering wheel. 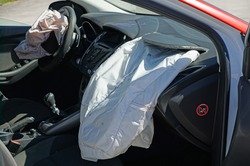 END_OF_DOCUMENT_TOKEN_TO_BE_REPLACED

Recently, a Texas jury ordered Audi to pay $124.5 million to an 11-year-old boy who was left brain-damaged, partially paralyzed and blinded in his right eye in a 2012 rear-end collision. The verdict is in response to Audi equipping their 2005 Audi A4 with a seat back that was too weak to withstand a rear-end crash.

At the trial, the parents of the boy argued that, despite wearing seatbelts, the inadequate seat back caused the front seat collapse resulting in the driver, the boy’s father, sliding backward and hitting his head on his son’s head in the back seat. The accident occurred when their car was rear-ended after they stopped for a school bus.

END_OF_DOCUMENT_TOKEN_TO_BE_REPLACED

Earlier this month, the Obama Administration announced a $70 million fine against automaker Honda. The fine–the largest civil penalty levied against an automaker–is in response to Honda’s failure to report to regulators death and injury complaints for over a decade between 2003 and 2014.

Among those complaints that were not reported were incidents of airbag failures manufactured by Japanese auto supplier Takata Corp. Takata-made airbags can rupture after a crash creating potentially fatal injuries to drivers and passengers.

This government action highlights the serious consequences to the American public of defectively manufactured automobiles. Each year, thousands of people are injured or killed as a result of unreasonably dangerous and defective cars, trucks, and motorcycles. Government action, like that taken against Honda, along with civil lawsuits against the manufacturers of defective automobiles work together to expose defective products, compensate those who have been injured or killed by these defective products and serve to improve future products and protect the public.