An investigation by the USA Today Network and Kaiser Health News has uncovered evidence that more than 260 patients have died since 2013 after outpatient procedures at surgery centers across the country. Dozens of people – including children as young as two – have died after routine operations, such as colonoscopies and tonsillectomies. 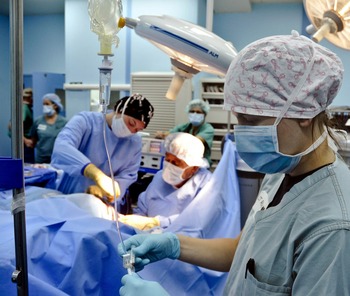 · Surgery centers have dramatically expanded their business by taking on increasingly risky surgeries. The results have been tragic. Investigators found that at least 14 patients have died after having spinal surgeries that were typically reserved for the best hospitals and surgeons.

END_OF_DOCUMENT_TOKEN_TO_BE_REPLACED

The third leading cause of death in the United States may come from those you trust the most. A new study published in The BMJ (formerly the British Medical Journal) found that medical errors may cause over 250,000 deaths a year in the United States alone. Topped only by heart disease and cancer, these errors by medical professionals include diagnostic errors, surgical errors, infection, medication errors, communication breakdowns, failure to perform the necessary tests, and even healthcare worker fatigue. The findings were created from studies done at Johns Hopkins Medicine starting in 1999.

The study calls for wide-ranging changes in the medical field, not only to correct these possibly deadly errors but also in how the errors are reported. “Medical error” is not a reported cause of death on death certificates. Similarly, there is not a “medical error” category in the annual reports on deaths and mortality from the Center for Disease Control and Prevention (CDC). The CDC only focuses on the “underlying cause of death” in their statistics, so even if a medical error is present in a case, the focus for the CDC remains on the reasons that led a person to seek medical treatment. Also, billing codes, the codes used when categorizing inpatient and outpatient treatment, are focused on maximizing billing and not recognizing medical errors. The death certificate and cause of death listed must line up with the aforementioned billing code.

Over the last ten years, Illinois public hospitals have paid out more than $180 million for patient deaths resulting from medical errors. Cook County paid out $93.2 million in settlements for 79 wrongful death cases at four different Chicago hospitals in the same span. The Johns Hopkins study is an attempt to shed light on these errors. “The inability to capture the full impact of medical errors result in a lack of public attention and a failure to invest in research”. The first step in making medical facilities safer is by creating a proper way to report these deaths caused by medical errors. Johns Hopkins Medicine, as well as other medical groups, are calling for reform starting with creating a “medical error” box on death certificates. By first creating a proper and efficient way to collect data on patient death and medical errors, medical professionals can then create the proper safety nets and protocols to address the problem.

END_OF_DOCUMENT_TOKEN_TO_BE_REPLACED

Researchers around the world continue to look into what drives a dangerous issue in medicine: the “August Effect.” It has been found that the month of August is the most dangerous time for hospital patients, as morbidity and mortality rates seemingly increase in August. The concern is whether or not this is a malpractice issue related to junior doctors taking over more responsibility as the summer ends, due to residency and internship start and changeover times, or some other systemic problem. One study in England found that the cause of the “August Effect” was not junior doctors, but that possible likely factors are errors, poor prioritization, and omissions. This is a scary scenario and something that personal injury lawyers who handle medical malpractice cases are monitoring closely. Hospitals need to be a place where patients feel safe and are taken care of by qualified, skilled doctors, nurses, and administrative personnel. Patients cannot be the victims of budget cuts, overworked staff, or other issues that are not their fault. If you or a loved one has suffered an injury or bad outcome as a result of any type of medical negligence by a doctor, nurse, hospital, or other medical provider, you should contact a skilled personal injury attorney with experience in medical malpractice cases. The law in Illinois for medical malpractice matters is very technical and different from that pertaining to other personal injury matters, such as car accidents, slip and fall injuries, and the like. Only a qualified personal injury lawyer can properly advise you about a potential medical malpractice case.

Related Posts: Common Birth Injuries Caused by Medical Negligence, Can a Doctor be Held Liable for an Opioid Overdose?, Medical Malpractice Can Cause Cerebral Palsy, Surgical Mistakes that Should Never Happen But Often Do