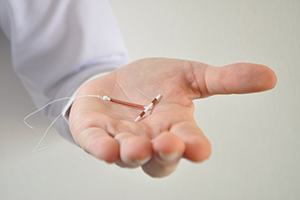 More women in the US are using an IUD than ever before. In fact, according to the Guttmacher Institute, as many as 4.4 million American women use IUDs. Many women are choosing this birth control option because of a 99% effectiveness rate at preventing pregnancy and the ability to last up to 10 years. Recently, however, the complications associated with the ParaGard IUD—especially during removal of the device--have resulted in women filing lawsuits against the manufacturer. If you have been damaged during the removal of your ParaGard IUD, the defective medical device attorneys at The Collins Law Firm can review your case and determine if you have a claim against the Cooper Companies who manufacture and market ParaGard.

What is a ParaGard IUD?

An IUD (intrauterine device) is a small device that gets placed inside of your uterus to prevent contraception. These devices are long term, completely reversible, easy to get, and available in hormonal and non-hormonal options. These benefits make them an extremely popular contraceptive choice. In fact, according to Planned Parenthood, IUDs are currently the third most popular reversible contraceptive option among women aged 25-44.

The ParaGard is a specific type of non-hormonal IUD. It is a small T-shaped device wrapped in copper wire, that can remain implanted for years, with the option to have it removed at any time. Currently, it is the only copper-containing intrauterine device approved for use in the U.S. by the FDA, which approved it for 10 years of continual use. The ParaGard releases small amounts of copper which causes an inflammatory reaction within the uterus which prevents pregnancy. It is very effective: less than 1 percent of women who use ParaGard will get pregnant in the first year of use.

Despite it being marketed as a very safe birth control option, the ParaGard IUD is not without risk. Women who use the ParaGard should know that the devices have been linked to some severe injuries and complications. The most serious of the dangers associated with the ParaGard occur during removal of the device. However, there are some other dangers that should be noted as well.

Expulsion or Migration of the IUD

Pelvic inflammatory disease (PID) is a risk associated with all IUDs that usually occurs within the first 3 weeks after insertion. PID is an infection of the uterus that is extremely common and can be treated with a simple round of antibiotics. However, if left untreated, PID can cause other issues that are much more serious. Infertility, ectopic pregnancy, and death are common complications associated with PID.

The main danger associated with ParaGard is the need for surgery after an incomplete removal of the device. During removal, one or more of the plastic arms of the T-Shaped device can break off and remain in the body. The remaining piece of jagged, brittle plastic can quickly:

These situations lead to the necessity of one or more surgeries to find and remove the missing piece. In rare cases, a hysterectomy may be necessary. In addition, if copper pieces of the device are left in the body, they can cause scarring and inflammation and injury.

Do you Have a ParaGard Lawsuit?

Multiple women have begun filing lawsuits against TEVA Pharmaceuticals or The Cooper Companies (the IUD’s manufacturers) after suffering injuries linked to the ParaGard IUD. The lawsuits are claiming that the companies manufactured and sold a defective product and failed to provide adequate warning of the risks and injuries associated with their IUD. If you have one of the following injuries, you may have a claim against the manufacturer of ParaGard:

Call The Collins Law Firm to Discuss Filing a Lawsuit

If you or a loved one has suffered pain or injury due to the use of a Paragard IUD you may be entitled to compensation for medical expenses, lost wages, and pain and suffering. The Collins Law Firm has experience representing those who have been damaged due to defective medical devices. Call us today at (630) 527-1595 or fill out this form for a free consultation regarding your potential ParaGard lawsuit. Our attorneys will go over every detail of your case to determine if we can help you get compensation for your suffering. There is no obligation and no risk; you will owe us nothing unless you win.