× Close Video
Personal Injury - Environmental Business Law Contact Us For a Free Consultation
When You Need a Lawyer Who Will Fight for You
COVID-19 UPDATE: Collins Law is open, providing excellent representation for clients by phone, email, and videoconference.
Home
Attorney Profiles
John D. Risvold 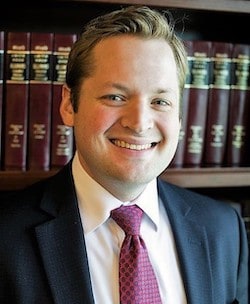 As a trial lawyer, John works tirelessly to get the best outcome for his clients and has recovered over $5.5 million for his clients. He has tried cases to verdict in Illinois and handled cases throughout the country. Prior to joining The Collins Law Firm, John defended large multi-national corporations in multi-million dollar litigation, giving him a unique insight into how cases are handled by the companies and individuals responsible for catastrophic injury.

John's cases have been recognized by Top Verdict, including:

His work has earned him numerous honors, including:

John is active in several professional organizations that work to ensure his clients’ access to the courts remains intact, including the American Associate for Justice, the Illinois Trial Lawyers Association, and the Chicago Bar Association.

After her caesarian section surgery, a surgical sponge was left inside of a new mother. John was able to successfully negotiate a confidential settlement with the hospital and the OB/GYN on behalf of the client.