The Collins Law Firm is now accepting claims from veterans and family members who were stationed at Camp Lejeune between 1953 and 1987 and who have suffered from illnesses related to the water contamination on the base. Our firm’s commitment to fighting for the underdog is demonstrated by our long history of representing people and communities harmed by toxic contamination. Let our experienced environmental attorneys help you get the justice you deserve. 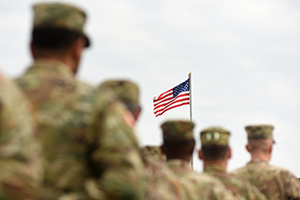 After years of being denied justice by the government, Camp LeJeune veterans and their families–-who were exposed to cancer-causing toxins at the military base–-are about to get their day in court.

The House of Representatives recently passed H.R. 3967, the Honoring Our Promise to Address Comprehensive Toxics Act (Honoring Our PACT Act), a broad bipartisan bill that addresses the issue of veterans exposed to toxic chemicals while serving. On June 16th of this year, the Senate passed an amended version of the Act. This version is now waiting to be voted on in the House, after which it will go to the White House, where President Biden is expected to sign it into law. Importantly for Camp LeJeune veterans, this bill includes the Camp LeJeune Justice Act of 2022.

In 1982, the Marine Corps discovered that the water at Camp Lejeune was contaminated with volatile organic compounds (VOCs) including Trichloroethylene (TCE), Perchloroethylene (PCE), Benzene, Vinyl chloride, and other toxic chemicals. Over the years, contaminants from unlined landfills, a dry cleaner, and leaking, aboveground and underground storage tanks had migrated into the soil and groundwater at locations across the base. Unfortunately, Camp Lejeune relied entirely on groundwater for its drinking water.

Because of the environmental contamination on the base, the US EPA added Camp Lejeune to its National Priorities List in 1989. This triggered a public health assessment by the Agency for Toxic Substances and Disease Registry (ATSDR). According to ATSDR, the water contamination at Camp Lejeune had begun in the 1950s and continued until 1987, although the most highly contaminated wells were removed from service in 1985. Moreover, the water on the base was contaminated with toxic chemicals at levels far above those permitted by safety standards. The areas affected were those served by three water distribution systems on the base-- Tarawa Terrace, Hadnot Point, and Holcomb Boulevard.

The ATSDR health assessment further concluded that “Past exposures from the 1950s through February 1985 to trichloroethylene (TCE), tetrachloroethylene (PCE), vinyl chloride, and other contaminants in the drinking water at the Camp Lejeune likely increased the risk of cancers (kidney, multiple myeloma, leukemias, and others), adverse birth outcomes, and other adverse health effects of residents (including infants and children), civilian workers, Marines, and Naval personnel at Camp Lejeune.”

A later study conducted by ATSDR, comparing the mortality rates of the marines at Camp Lejeune with those of marines stationed at Camp Pendleton “ found an increased risk of death in the Camp Lejeune cohort for several causes including cancers of the cervix, esophagus, kidney, and liver, Hodgkin’s lymphoma, and multiple myeloma.”

All told, an estimated 1 million servicemen and women, family members, and civilians working at Camp Lejeune in North Carolina were exposed to toxic drinking water during this time.

In 2012, Congress passed the Honoring America’s Veterans and Caring for Camp Lejeune Families Act of 2012 which directed the Veterans Association (VA) to provide health care benefits to veterans (and family members) who served at Camp Lejeune for at least 30 days between August 1953 and December 1987. The U.S. Department of Veterans Affairs (VA) was also charged with providing disability benefits to marines and family members suffering from diseases linked to the chemicals at Camp LeJeune. However, most claims were denied for various reasons. According to a report by CBS News, the VA’s overall rate of approval for claims from Camp Lejeune averaged only 17%.

When veterans attempted to sue for the damages caused by the contaminated water at Camp Lejeune, a North Carolina law-- which required cancer to have been diagnosed within 10 years of toxic exposure–prevented marines and their families from filing a lawsuit in court. The combination of these two factors left many veterans and their families without access to justice.

When passed, the Camp Lejeune Justice Act will correct this injustice and allow affected veterans and their families to pursue compensation for illnesses resulting from toxic exposure by filing a Federal Tort Claim. If that claim is denied, the Act allows them to file a lawsuit in the Eastern District of North Carolina. The new law will cover all active-duty personnel, reserve and National Guard members, and family members.

Who Is Eligible to File a Camp Lejeune Lawsuit?

In order to file a lawsuit for damages relating to Camp Lejeune, you must have been exposed to the contaminated water for at least 30 days between August 1, 1953, and December 31, 1987. You must also prove a connection between your illness or injuries and the chemicals which contaminated the camp’s water. This will most likely require the testimony of an expert witness who can explain to the judge or jury that the condition was caused, at least in part, by exposure to the contaminated water.

According to the U.S. Department of Veterans Affairs, the following illnesses are potentially associated with the toxic water at Camp LeJeune.

Please understand that cancers and illnesses other than these may also be compensable under the new law.

The Camp Lejeune Justice Act of 2022 also allows the representative of a person who was exposed to the contaminated water to bring a case on behalf of their loved one. This impacts people who have family members who passed away from an illness they developed as a result of toxic exposure at the base, as well as people whose family members suffered from an illness related to exposure before passing away from another cause.

What Happens if the Honoring Our PACT Act Becomes Law?

If the House passes the amended version of the Honoring our PACT Act (which includes the Camp LeJeune Justice Act of 2022) and the President signs it into law, marines, their families, and civilian personnel who were exposed to toxic drinking water at Camp Lejeune will be able to file a claim for damages in the Eastern District of North Carolina against the United States government. Provisions of the Act include:

If you or a loved one has suffered from an illness related to the toxic contamination at Camp LeJeune, you may soon be able to access justice in court. The Collins Law Firm has been representing individuals, families, and communities impacted by toxic exposure for two decades. We are proud to have challenged big polluters and recovered millions for our clients. We can help you, too. Let our experienced toxic tort attorneys help you understand your rights and fight for you in court. Call us at (630) 538-8887 or fill out our contact form for a FREE EVALUATION of your Camp Lejeune claim now.