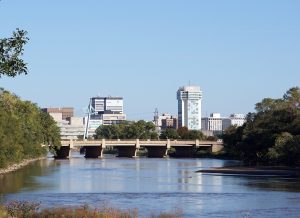 I’ve been an environmental lawyer for more than 20 years, working for communities whose homes, air, and water have been polluted by industry’s careless disposal of dangerous chemicals.  I’ve seen government respond aggressively to protect its citizens under these circumstances, but more often not so aggressively.  I’ve even seen government pretend that the contamination is not as bad as it really is to justify not doing anything about it.

But I’ve never seen a state government so matter-of-factly abandon its citizens in need of protection as the State of Kansas did to the residents of more than 1,000 homes in the Historically Black neighborhoods that are located Northeast of downtown Wichita, including the Wichita Independent, Northeast Millair, and Northeast Highgate neighborhoods.

Kansas should be ashamed of itself.  It must immediately reverse course and do its duty to protect its citizens against dangerous chemical contamination.

For the last 50 years or so, a nearly 3 mile-long plume of groundwater contaminated with a cancer-causing chemical known as “trichloroethylene”, or “TCE”, has lurked just 15 feet under more than 1,000 homes in these neighborhoods.  Below, outlined in red, is an approximate map of the groundwater plume, as estimated by the Kansas Department of Health and Environment (“KDHE”):

TCE is an industrial solvent.  It’s used to clean the dirt and grime off of parts and machinery in industrial processes.  TCE is very dangerous to human beings.  It causes cancer and has NO safe level.  In other words, there is no level of TCE to which a human being can be exposed that is not potentially harmful to him/her.  And like all carcinogens, TCE is especially threatening to children, whose immune systems do not expel toxins as efficiently as a healthy adult’s immune system would.

Reports indicate that most of the TCE was dumped in the 1970s/1980s at the Union Pacific railroad property at the 29th and Grove site in Wichita.  Over the years, the dumped TCE bled down through the soil, ultimately seeping into the area’s shallow groundwater.  Once in the groundwater, the TCE then migrated under the homes, in a southerly groundwater flow, stretching out to at least Murdock Avenue.

Reports also indicate that, for decades and until just two months ago, the residents of these 1,000+ homes were not told of this contamination in their community, and how it might threaten them.

Which brings us to “vapor intrusion.”  “Vapor intrusion” is a term describing how a chemical in groundwater – – like TCE – – can turn into a gas, or “vapor”; drift back upwards through the soil above the groundwater; and then “intrude” in “vapor” form into buildings above the groundwater.  Buildings like homes and schools.  Where the residents inside will breathe the TCE.  But, unless they are warned, they won’t know it, because the TCE has no color or odor.

With a situation so potentially health-threatening as this, and long before the year 2022, the government of the State of Kansas should have moved aggressively to do the following to protect its citizens:

However, from all I’ve been able to learn, the State of Kansas has done basically none of this.  Fifty years after the TCE was originally dumped, the shallow area groundwater is still loaded with TCE; there has been no comprehensive testing for the possibility of vapor intrusion (despite some spotty, limited testing years ago); and the area’s residents were understandably shocked, angry and scared when they were told of this problem only earlier this year. . . twenty-eight years after the contamination was first discovered by agencies whose very job it is to protect citizens’ health.

These families bought and maintained homes in these neighborhoods; raised children there; and no doubt took comfort in the durability of their home’s value, as the “nest egg” they would one day leave to those children.  But they were not told until this past September – – when the contamination running just under their homes was a half-century old – – that they’d been living in the midst of such a dangerous chemical.  The peace and comfort they had believed their community offered, all these years, had been an illusion.

Their state knew it; the company(ies) that caused the contamination knew it, too.  But the people with the most at stake – – the residents – – did not.

As it turns out, Kansas did none of these things.  Worse, it essentially told these residents they were on their own to deal with this problem:

In a public community meeting held on November 5, 2022, an environmental administrator for KDHE told the residents that the State could not afford to protect them, that the KDHE was struggling with funding and understaffing, and in fact, would need volunteer contributions of cash and staff before it could do its job:

“KDHE would appreciate any extra funding and any extra staff that anyone could get for us… We need more staff to handle all of the projects we have.  Our regulations started 50 years ago, and we’ve been trying to clean up 150 years of contamination since then. We wish we could do more, and we wish we could do it quicker.”

What the hell is going on here?  Either the State of Kansas has chosen to not dedicate adequate resources to protect its own citizens against dangerous chemicals in their environment, or it does have adequate resources, but has chosen for some reason not to put them to work to protect the residents of the Historically Black neighborhoods of Wichita.  Whatever the reason, it is not acceptable. These citizens are human beings, who, with their tax dollars, have EARNED the right to expect peace and comfort in their homes and community and to expect their state’s protection.  Not twenty-eight years of silence.

Kansas should be ashamed of the way it has treated these citizens.  And it must immediately find the resources – – and decency – – necessary to protect them and start doing its job.

Shawn Collins is an environmental trial attorney based in Illinois, representing communities, families, and individuals victimized by chemical contamination in their air, soil, and water.  He is the founder of The Collins Law Firm, PC.