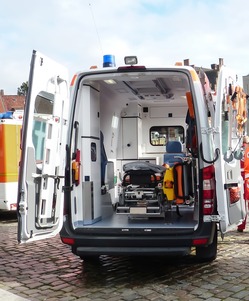 Sometimes, a person’s car accident injuries are so serious that there’s no decision to make: he/she must be transported by ambulance to the hospital.

But oftentimes, it’s not so obvious. The accident victim may not feel badly injured or may feel embarrassed to get into an ambulance. I’ve known people (usually men) who regard it as a sign of toughness to drive themselves to the hospital (if they go there at all) rather than take an ambulance.

If you’re wondering whether you or a loved one should take an ambulance to the hospital, keep these things in mind:

(1) How a person feels in the immediate aftermath of an accident is often not a true measure of whether she is injured, or how badly. Injuries from the accident may not fully express themselves right away. Also, our bodies produce adrenaline in response to traumatic events like a car accident, and that adrenaline can temporarily mask the pain, and send a false signal about the extent of an injury.

(2) Symptoms-for example, bleeding, difficulty breathing, chest pain, or a lightheaded feeling, disorientation-can rapidly worsen on the way to the hospital. If you are in an ambulance, and your condition worsens, you will have access to trained medical professionals, and medication. EMT’s can give you pain relief, IV fluids, and monitor your condition. Ambulance personnel will also alert the hospital to your impending arrival, and make sure the hospital is ready to provide the care you require. If you are in your car, however, your condition may worsen to such a point that you are unable to get yourself all the way to the hospital, and may even be a danger to other drivers on the road. And certainly, if you are in your car, you will not have immediate access to medication and potentially life-saving treatment.

(3) The ambulance personnel will know which hospital you should go to. In larger cities, for example, where there are often several hospitals, one may provide better care for heart issues, another for trauma, still another for brain injuries. You may not even know the names of all the available hospitals, let alone which is best at what. But your ambulance personnel likely will.

(4) If there is heavy traffic on the way to the hospital, and the trip to the hospital is going to take a long time, being in an ambulance is a way to be sure that you have access to treatment should you need it during the trip.

(5) Err on the side of caution. Better to look back and say that you didn’t need to have taken the ambulance after all than to look back and wish you had. If you are in significant pain after the car accident; feel dizzy, weak or faint; are having breathing difficulties; are having trouble seeing or speaking, or feel confused; are bleeding significantly; or just don’t feel right, take the ambulance.

Finally, not taking an ambulance will make it seem-later on, when you and your lawyer are trying to settle your claim for a fair amount of money-that your injuries could not have been that significant. “See, she even refused to take an ambulance!” the other side will say. That’s OK, if your injuries turn out to be insignificant. But it can be very harmful, if the injuries really are serious, but you treated them like they were no big deal.

So, refuse to take an ambulance only when you are truly confident that you have not been significantly injured, and that your injuries won’t worsen in the near future. If you have any doubt at all about that, take the ambulance.