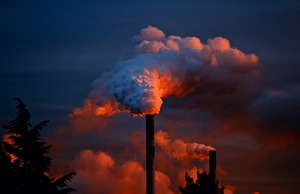 Why is this critical? It’s simple. When the attorney general is able to punish polluters with financial penalties, it deters them and other companies from dumping toxic waste, spewing out air pollution, or spilling hazardous chemicals in our water supply in the future. Without this threat, Illinois companies are free to brazenly put people’s health at risk. This is not just rhetoric; it is actually happening. Federal data shows Illinois still has “some of the highest risks in the nation for cancer, lung disease and other health problems linked to toxic chemicals from industry smokestacks.” 1

So, why would the Illinois EPA fail to use its most powerful weapon–the attorney general–to enforce environmental laws? Perhaps telling is the fact that Rauner’s EPA Director, Alec Messina, used to lead a trade group that lobbied on behalf of industries regulated by the agency he now leads. Knowing that, it should come as no surprise that Illinois’ EPA is ignoring serious cases of environmental contamination at the expense of people’s health. Messina’s loyalties lie with the companies that pollute, and if he doesn’t refer them to the attorney general for violations, they won’t be punished. It is despicable. Rauner is using the same playbook as Trump is with the US EPA and its new chief, Scott Pruitt: put the fox in charge of the henhouse.

In other words, he is using his power to protect polluters, not their victims.

Related Posts: Trump Re-Nominates Anti-Science Zealot to Lead the Council on Environmental Quality, 130 Livonia Homeowners Sue Ford for “Enormous Toxic Chemical Pool” Causing Contamination in Their Neighborhood, Norman Berger Joins the Collins Law Firm as Of Counsel, Are We Ready to Take on the Fossil Fuel Industry Over Global Warming?