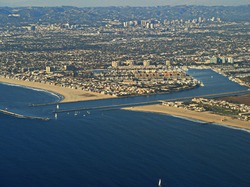 It’s such a compelling story: A 10-years-in-the-making plan to pour $1 billion into the redevelopment of Jordan Downs, a once-dangerous, crime-ridden public housing project in the Watts neighborhood of Los Angeles, that had been the stage for nationally-televised riots in the 1960s. The idea is to convert what had been 700 badly scarred public housing units into a beautiful, mixed-income neighborhood of 1,400 units, shops, and park space. A real monument to progress and understanding.

But as the re-development was being launched, a plume of TCE contamination was discovered under the development, threatening, according to the Physicians for Social Responsibility, the health of children and pregnant mothers who would live there.

Now what? A billion dollars is on the line.

The answer is as easy as it is necessary (and maybe expensive): stop the show, until the TCE contamination can be cleaned up, and assurances given by public health scientists that there is no health risk to the new families who will move into the re-developed Jordan Downs. (And take a hard look into who failed to detect the presence of a large TCE plume before $1 billion got committed.)

Easy for me to say, right? It’s not my money that’s tied up in the project.

That’s true, but, morally and practically, there is no other answer, regardless of whose money is involved. Who is going to want to move into the new Jordan Downs, with a carcinogen threatening the health of the children who would play there, and the pregnant mothers who will live and raise their families there? Perhaps more to the point: will Los Angeles really let people live there….knowing what it now knows…until there is a thorough cleanup and a clean bill of health for the area?

Best to admit this reality, and go full tilt with the cleanup, before anyone is allowed to move in. If project and government leaders do that, then the re-developed Jordan Downs will stand as an even greater monument to respect for all citizens, and a categorical rejection of the customary American practice of tolerating its citizens living amidst toxic chemicals, so long as those citizens are poor minorities.

Related Posts: CRIMINAL NEGLIGENCE? Did School Officials Send Kids to TCE-Contaminated Bronx School for 20 Years?, How TCE and PCE Can Harm Us: Expert Information You Can Trust , What You Need To Know About Trichloroethylene (TCE), WHAT THE PEOPLE OF NONANTUM NEED TO KNOW ABOUT TCE VAPOR CONTAMINATION