Starting in 1984, the Sterigenics plant in Willowbrook, IL consistently emitted a chemical known as ethylene oxide into the air. These air emissions continued until February 15, 2019 when Illinois EPA ordered Sterigenics to stop operating because it found that Sterigenics’ emissions posed a danger to public health.

Ethylene oxide is a colorless, flammable, gas that Sterigenics uses to sterilize medical and other equipment. In the summer of 2018, the Agency for Toxic Substances and Disease Registry (a branch of the CDC), alerted the Willowbrook community that there is an elevated cancer risk for residents and those who work in the community near the Sterigenics plant. Using air samples taken by EPA in commercial and residential areas within a mile of the plant, ATSDR estimated that Sterigenics’ ethylene oxide emissions were making nearby residents 64 times more likely to get cancer.

On May 29, 2019, U.S. EPA hosted an Open House and Community Meeting to provide an update on its work to better understand the ethylene oxide emissions from the Sterigenics facility. At the meeting, U.S. EPA updated the community on the air testing it conducted over 49 days between mid-November 2018 and the end of March 2019. The Agency tested the air at 8 locations within a couple miles of the facility for ethylene oxide. The graph below shows that the levels of ethylene oxide that the U.S. EPA found in the air while the plant was still operating dropped significantly after the plant was forced to close. This drop in emissions led U.S. EPA to conclude that the facility is responsible for a significant amount of the ethylene oxide detected. 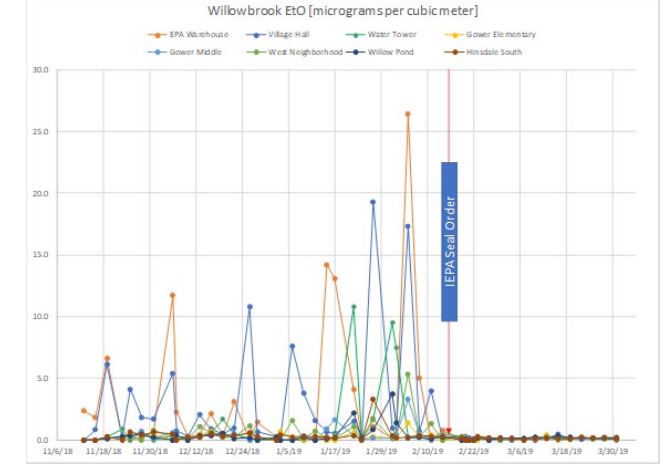 U.S. EPA also updated the community on the “Risk Assessment Modeling” it has been working on to estimate the chance that breathing ethylene oxide from the Sterigenics facility will cause people to develop cancer. The purpose of U.S. EPA’s recent risk assessment modeling was to estimate the cancer risk associated with two future scenarios: (1) the risk of developing cancer associated with Sterigenics’ ethylene oxide emissions if it were to reopen and continue operating without any additional pollution protections; or (2) if it were to reopen and operate with increased pollution protections such as a higher air emissions stack.

While the agency has yet to release the full report, its summary findings confirm that people living near Sterigenics will continue to have an increased risk of developing cancer if the facility is left to operate as it had in the past. U.S. EPA also found that the risk of a person in the Willowbrook community developing cancer would be much lower if the facility’s ethylene oxide emissions were more highly controlled through additional pollution protections.

Community groups, including citizens with EtO Medical Monitoring and Stop Sterigenics, as well as city, state, and federal agencies also attended the meeting to distribute information and answer questions.

If you believe you have been impacted by the ethylene oxide contamination from the Sterigenics plant in Willowbrook, and have questions about your health or legal options, please call one of the experienced environmental personal injury attorneys at The Collins Law Firm today at 630-527-1595 to protect your rights.