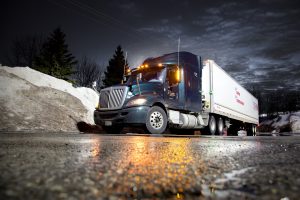 Some of the scariest moments on the road occur when a tractor-trailer suddenly decides to pull into your lane, oblivious to the fact that you are in the way, or turns in front of you, unaware that your car is there. At that moment, you realize that the truck is not going to stop because they can’t see you. Usually, you are able to slow down or move into another lane to avoid injury, but for some motorists this situation becomes deadly.

Side underride collisions happen when a car crashes into the side of a tractor-trailer, and the force of the crash propels the car underneath the truck. These kinds of truck accidents are especially dangerous because the truck can sheer off the top of the car and kill the occupants. Usually, these side underride collisions occur at night, when a truck is trying to cross or turn onto a street or highway. But they can also occur when a truck suddenly moves into a different lane, trapping a car under the body of the truck. Unfortunately, these side underride accidents–where a car ends up wedged underneath a truck– can be deadly even at low speeds.

In fact, several hundred people die each year when their cars lodge under tractor-trailers from the side, according to the Insurance Institute for Highway Safety. This is unacceptable, especially when you realize that most of these accidents could be avoided if trucks were equipped with side guards: panels placed around the lower part of a truck’s trailer. Side guards would prevent cars from sliding under the body of the truck, protecting the driver and passengers. So why aren’t trucks equipped with these potentially life-saving side guards? Because the government, so far, has not required it.

Rear guards were first introduced in the 1960s after actress Jayne Mansfield’s car ran under the rear of a semi-truck and she was decapitated. Despite the shocking headlines at the time, it wasn’t until the late 1990s that the National Highway Traffic Safety Administration finally mandated rear guards on all trucks. At the time, the trucking industry was told that requirements for side guards would be coming, but twenty years later that has yet to happen.

Bi-partisan legislation to mandate side guards on trucks was introduced in 2017 and reintroduced this past March, but it has yet to gain traction in Congress, even though studies show that side guards would save lives and have the potential to reduce injury risk in about 3/4ths of large truck side crashes. Crash tests by the Insurance Institute for Highway Safety show the effectiveness of well-built side guards in preventing these often fatal underride crashes. In the tests, the side guards stop the car from going underneath the trailer, allowing the airbag and seatbelt to protect the driver.

Europe understands the benefits: all trucks in Europe are required to have side guards, and they are working. The UK realized a significant drop in fatalities after they issued a national side guard mandate. If Europe can protect drivers, why can’t the U.S.?

One answer may lie in the fact that the American Trucking Association and the Owner-Operator Independent Drivers Association have come out in opposition to proposed side guard legislation, saying that federal mandates would be too expensive and impractical. They claim that the side guards would weigh the truck down, could weaken the trailer, and are not cost-effective. Not surprisingly, the transportation lobby is a big contributor to many legislators’ campaigns. According to the Center for Responsive Politics, the trucking industry contributed $5.79 million to election campaigns in 2018 alone. The trucking industry can afford to be unconcerned about side guards; when a small car crashes into the side of a huge truck, it is usually the truck driver who walks away unhurt.

Our legislators, however, are not supposed to be so callous. Until they start paying attention to the families of drivers who lost their lives in side underride collisions, instead of campaign money from the transportation industry, drivers of cars will continue to be subjected to unnecessary risk when they share the road with large tractor-trailers. And that is a shame.

If you have lost a family member or seen their life impacted by a side underride collision with a truck, our truck accident attorneys can help. We have years of experience with truck accident cases and know how to get justice for our clients. Call The Collins Law Firm today at (630) 527-1595 for a FREE EVALUATION of your case or fill out our contact form now.