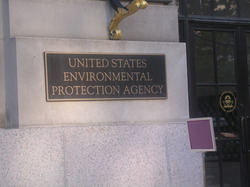 Democrats have long maintained that Dourson–whose firm evaluated chemical toxicity and made universally industry-friendly conclusions–is so outside the scientific mainstream as to be outrageous.

The current EPA welcomes the contributions of this scientific crackpot. Under Scott Pruitt’s leadership–in a move that appears to circumvent the Senate’s confirmation process–Dourson has already been hired as a top advisor, with the ability to influence key regulatory decisions.

The fact that President Trump and EPA chief Pruitt think this kind of industry today is a good choice to regulate chemicals at the EPA demonstrates just how far this administration has fallen with respect to environmental protection. Basically, they don’t believe in any. Hopefully, a few more Republican senators will have the decency and common sense to join Tillis and Burr and keep this dangerous nominee (and others like him) from endangering the country.