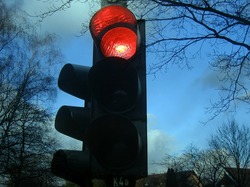 Across the Chicagoland area red light cameras have been installed at hundreds of traffic signals. These red-light cameras are sold to citizens as a way to reduce traffic accidents and increase safety on the roadways. The problem is, the cameras aren’t making us safer. These cameras actually increase the likelihood of an accident occurring.

Similarly, a Chicago Tribune study found a 22 percent increase in rear-end crashes that caused injuries at intersections with red-light cameras.

The researchers also determined there is no safety benefit from cameras installed at intersections where there have been few crashes with injuries in the past. In fact, after installing cameras at those intersections, accidents actually increased.

The study found that while T-bone crashes decreased slightly at intersections with cameras, rear-end collisions skyrocketed as drivers slammed on their brakes to avoid the camera-generated ticket.

Chicago is home to the largest automated enforcement program in the country, which has grown to more than 350 red light cameras and raised more than $500 million in $100 tickets since 2002.