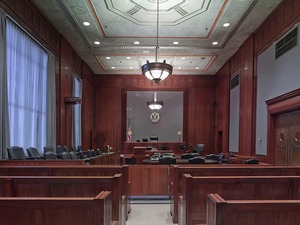 One of the surest topics on which to get agreement is that we should punish the filing of “frivolous” lawsuits. There are legitimate debates to be had over the definition of “frivolous”, who decides what is “frivolous”, and what the punishment (usually called a “sanction”) should be. For years, and for very good reason, there has been wide agreement that it’s best to leave these decisions to the judge on the case. Because he/she is in the best position to know whether a lawsuit is so lacking in merit (so “frivolous”) that it does not deserve to be in a courtroom, and if so, what the sanction should be for the party and/or lawyer who filed it.

As a lawyer who mostly files (rather than defends) lawsuits, I completely agree with the sanctioning of those who bring frivolous cases to court. Why? Because they not only bring discredit to my profession, but they occupy the taxpayer-funded resources of the court with cases that don’t deserve them, thereby making those resources unavailable (or less available) for those cases that do deserve them.

And I also agree that it must be the judge on the case who decides what is “frivolous”, whether there should be a sanction, and, if so, and what the sanction should be. This does not work perfectly, of course-nothing does-but I don’t believe there can be any responsible doubt that the judge is in the best position to make these decisions. That judge is in the best position, for example, to decide whether the lawsuit stretching the legal precedent is just a meritless money grab by an unscrupulous lawyer–who should be sanctioned– or a good faith effort by the lawyer to try to expand the law to help the powerless in society. In which case, no sanction should be imposed. Because some of the most important legal cases in our history started out with good faith efforts like this.

With these kinds of examples in mind, it is easy to see that it must be the trial judge who makes these decisions.

However, the Republican-controlled House of Representatives recently passed a bill that would take some of this discretion away from trial judges. It’s called the “Lawsuit Abuse Reduction Act of 2017”. At its core, this Act would make sanctions for frivolous lawsuits mandatory, and provide a formula for the amount that must be rewarded….no longer leaving these decisions to the judge in the courtroom, who is in the best position to decide how offensive to justice the lawsuit was. http://www.courthousenews.com/house-gop-moves-tamp-frivolous-lawsuits/

But the bill has an even bigger problem: it fails to provide any punishment for frivolous “defenses”. In my experience, frivolous defenses are a far greater threat to courtroom justice than frivolous lawsuits. What is a frivolous defense? Here are some examples:

· An insurance company paying a lawyer to contest an injury claim that the insurer knows is valid, all because the insurer hopes to wear down the injured party or her lawyer and pay less money to settle the case.

· A wealthy corporation making a plaintiff ask for relevant documents 7 or 8 or more times during the life of a case before it finally turns them over. This process can not only delay a case for 6-18 months, but it can also be extremely, and totally unnecessarily, expensive for the plaintiff just to get documents to which he is entitled.

· A defendant files multiple motions to have the plaintiff’s lawsuit thrown out of court, none of which have a significant chance of success, all aimed at delaying the day when the defendant has to face a jury, or pay to settle.

These are just some examples. But, strangely, we don’t hear about “frivolous” defenses. Only frivolous lawsuits. That’s because those who want such one-sided legislation are not about courtroom justice; they just want fewer lawsuits. Period.

Anyone truly concerned about justice in the courtroom wants to discourage any frivolous filing-whether it’s the lawsuit or the defense of the lawsuit.

Want to have some fun? Tell one of the Congresspeople so anxious to punish the filing of frivolous lawsuits to make it reciprocal. In other words, it also forces the trial judge to sanction frivolous defenses. So, if an insurance company or big corporation needlessly delays a case through meritless motions or refusing to turn over relevant documents, just to exert their financial advantage over the plaintiff, and make her beg for a settlement far less than what she deserves, the trial judge would be forced to sanction the company for doing that.

Ask the Chamber of Commerce and the Koch brothers if they will go for that.

And when they say they won’t, tell them to stay on the sidelines, and let trial judges run their courtrooms.