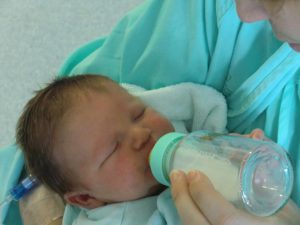 The product liability attorneys at The Collins Law Firm are investigating claims from the parents of premature infants who were fed Similac or Enfamil baby formula while in the hospital and then developed necrotizing enterocolitis (NEC).

Necrotizing enterocolitis (NEC) is a serious intestinal illness–typically affecting premature infants—that can cause permanent damage to a baby’s gastrointestinal system. The word “Necrotizing” refers to cell damage and death. “Entero” means the intestine, and “Colitis” means inflammation of the colon. NEC typically happens after the first 2 weeks of life in premature babies who are fed cow’s milk-based formula instead of breast milk. NEC develops when the tissue in the large intestine becomes inflamed due to a bacterial infection. The infection and inflammation cause sections of the intestine to become necrotic and die. When this happens, it can create a perforation (or hole) in the intestine which allows bacteria to escape into the abdomen and pass into the bloodstream. Unfortunately, NEC usually strikes suddenly and can progress rapidly. If not treated immediately, it may put a baby’s life in danger.

Who is Most Likely to Develop NEC

Although NEC may develop in any newborn baby, up to 80% of all cases involve premature infants. According to the Children’s Hospital of Los Angeles, between 1-5% of preemies in newborn intensive care units are affected by NEC. The smaller an infant is at birth the more likely he or she is to develop NEC: infants weighing less than 3 pounds, 3 ounces are most commonly affected. In addition, high-risk babies and premature infants who are fed formula have an increased risk of developing NEC. The illness is much less common in babies who are breastfed and is rare in babies who have not received any feedings. Fortunately, NEC is rare, affecting only one in 2,000 to 4,000 births. Sadly, however, it is the leading cause of death among premature infants aged 2 weeks to 2 months.

What Do the Studies Say About NEC and Infant Formula?

Studies dating back to 1990 show the increased danger associated with cow’s milk-based baby formulas. One study in Lancet showed that premature infants who were fed baby formula had a 6 to 10 times greater risk of developing NEC than babies fed only breast milk from their mothers.  Despite this and other scientific studies raising the alarm, the manufacturers of Similac and Enfamil failed to warn the public about this serious and potentially fatal side effect, according to lawsuits filed against the companies.

What are the Symptoms of Necrotizing Enterocolitis?

NEC is a serious gastrointestinal disease that can present suddenly and progress rapidly. That is why it is important to monitor your baby for the most common symptoms, especially if your newborn is premature. Symptoms of NEC usually develop in the first two weeks and may include the following:

If your infant develops any of the above symptoms it is critical to act quickly. Consult your doctor for a diagnosis as soon as possible.

How Is NEC Diagnosed? 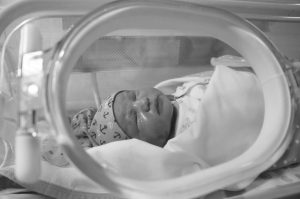 To diagnose NEC, your baby’s doctor will begin by taking an X-ray of your infant’s abdomen and doing some blood tests. If NEC is present, the X-ray will show gas or air bubbles in the intestines, and possibly even outside of the intestines.  The doctor may also insert a needle into your newborn’s abdomen to check for fluid. If the needle withdraws intestinal fluid from the abdomen, that’s a sign there’s a hole in their intestines. Infants with NEC also show low white blood counts which means their ability to fight infection is weakened.

What’s the Treatment for Necrotizing Enterocolitis?

Specific treatment will depend on several things, including how premature your baby is, their overall health and medical history, and how far the infection has spread. Doctors will also consider your infant’s tolerance for medications and procedures, as well as the extent of the illness.

What Is the Outlook for Infants Diagnosed with NEC?

Most infants with necrotizing enterocolitis fully recover. In some cases, however, there may be scarring or narrowing of the intestine, which can cause future complications. Babies who’ve had a large section of their intestine removed in surgery may also have difficulty absorbing nutrients normally. In the most severe cases, they may need a bowel transplant to live. The prognosis is better for babies with higher birth weights and whose illness is caught and treated early. Lower birthweight babies whose intestines were severely damaged have a less promising outlook. NEC is fatal in 10-50% of infants who weigh less than 3.3 lbs, depending on the severity of the disease, compared to 0-20% in babies who weigh more than 5.5 lbs. Extremely premature infants (less than 2.2 lbs) are particularly vulnerable. Mortality is mostly associated with extensive bowel involvement and NEC-related sepsis or multiple organ failure.

As of now, breastfeeding appears to be the best way to prevent NEC. Studies show that babies who were fed only breast milk were less likely to develop NEC than babies who were fed cow’s milk-based formula. For this reason, doctors recommend feeding at-risk infants breast milk, starting with small amounts and slowly increasing the feedings. If you have a premature infant in the NICU, you have the right to ask your doctor if your infant is being fed cow’s milk-based formula and if there is a safer alternative.

Pursuing a Legal Claim Against the Formula Companies

The Collins Law Firm is accepting claims against the manufacturers of Similac and Enfamil baby formulas. Abbott and Mead Johnson have marketed these products to parents as nutritionally complete breast milk alternatives that can help preterm infants gain weight. However, these formulas come with potential risks, risks that have allegedly been known by the manufacturers for over 20 years. Several studies have indicated that cow’s milk-based infant formula and fortifiers have been associated with a premature baby’s risk of developing Necrotizing Enterocolitis, a life-threatening illness.

Our experienced team of attorneys is seeking to hold Abbott and Mead Johnson, the manufacturers of the Similac and Enfamil baby formulas, accountable for their failure to warn the public of the increased risk of NEC in premature infants who are fed formula.

Do Have a Case?

If you answered yes to the above questions, you may have a claim against one of the manufacturers.  Fill out our contact form or call our product liability attorneys at (630) 527-1595 if your child passed away or suffered serious complications from NEC after being fed Similac or Enfamil while in the hospital. These tragedies should not be happening to families. Join together with other parents who are seeking justice for the suffering their infants endured because of corporations that chose profits over the health of premature infants.

You are under no obligation and your initial evaluation is confidential and free.