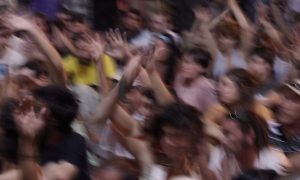 The grieving families of two promising young men from Naperville deserve justice for the tragic event at Travis Scott’s Astroworld Music Festival that took their lives last Friday in Houston.

Almost 300 concertgoers at the music festival organized by rapper Travis Scott were injured, eight people lost their lives, and 13 more are still hospitalized after the chaos that could and should have been prevented. We are shocked and saddened by this devastating tragedy that has impacted our community from so far away.

In our opinion, the people responsible should be held accountable, even punished criminally, for the reckless negligence and disregard for human life and safety that led to this senseless tragedy.

The signs of trouble at the concert began early. Even before the Astroworld Music Festival began, the festival’s promoters appeared to be trying to foment violence and fan frenzy, calling the festival “THE RETURN OF THE RAGE!” and posting videos of past Astroworld crowds pushing and running to the concert stage on social media.

The sold-out concert with 50,000 attendees did not start out well, with hundreds of concertgoers crashing through metal barriers and storming through security just to get into the festival. Then at around 9 p.m., the huge rowdy crowd began to surge towards the stage. This caused panic, injuries, people passing out, and people being so crushed by the crowd that they were unable to move or breathe. As the crowd compressed even further, some concertgoers fell to the ground, were trampled, fell unconscious, or suffered cardiac arrest.

According to people at the concert, the festival’s medics were inadequate, didn’t know CPR, lacked experience and equipment, and were unable to effectively help. A witness claims to have tried to warn security and cameramen that people in the crowd were dying but was ignored, threatened, and pushed aside. Other witnesses claim that Travis Scott was told of the danger but instead of stopping the concert, continued to perform. A barricade set up around the crowd made it nearly impossible for people to escape the chaos and the crowd. Videos of the festival are horrific and show concertgoers screaming for help while being ignored as the concert continues, even apparently as ambulances arrived to treat victims. That this tragedy occurred is incomprehensible.

Astroworld’s medical personnel, security, and emergency transport were quickly overwhelmed by the situation that was unfolding, and the Houston Fire Department had to step in to help, transporting over 20 people to the hospital, with 11 of them in cardiac arrest.

The festival promoter, Live Nation, has been in trouble before for safety violations. They have been fined or sued for unruly crowds, unsafe conditions, and injuries at past concerts. It appears that in this instance, the event organizers of Astroworld did not have the proper procedures or staffing in place to report red flags or warnings, deal with emergencies, or properly manage the crowd to prevent something like this from happening. It also appears that Travis Scot himself encouraged chaos and “rage” at the festival and ignored the signs that his fans were in danger. That is why they should be held accountable under the law for the gross negligence that resulted in this devastating and preventable tragedy. What happened at this music festival is unforgivable.

The two young men in our community, who senselessly lost their lives, deserve justice for themselves and their families. Tragically, we cannot give them back their lives and futures, but maybe we can prevent other families from ever having to grieve the loss of a loved one at a concert again. That is the least we can do.