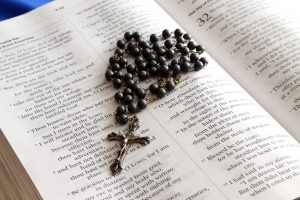 Sadly, the Diocese of Joliet is in the news again, this time for a failure to protect minors from a man who had been a teacher at multiple Catholic schools in the diocese. Jeremy Hylka, a teacher, father, and former youth minister, has been charged by Joliet police with child sex crimes. Specifically, Mr. Hylka is charged with grooming and traveling to meet a child.

The police issued a warrant for Mr. Hylka after they became aware of a Snapchat video, posted by an independent group called Saving Our Siblings, that showed the teacher meeting with a boy he believed to be 15 years old at a McDonald’s allegedly to engage in inappropriate sexual conduct. After realizing he had been caught in a setup, Mr. Hylka attempted to flee the McDonald’s on foot. The “minor” involved also turned over social media and text messages allegedly showing Mr. Hylka engaging in other inappropriate conduct. According to police, Mr. Hylka had solicited the boy for sex on the internet.

As a result, Mr. Hylka has been fired from his positions at Saint Joseph Catholic School in Lockport, Saint Paul the Apostle Catholic Church, and the Cathedral of Saint Raymond Nonnatus in Joliet on April 28, and the diocese has prohibited him from working or volunteering for any diocesan school or parish.

Unfortunately, this is not the first time that Mr. Hylka has been the subject of suspicion.

Mr. Hylka had been a teacher for 20 years at Joliet Catholic Academy when the school was made aware of online allegations of inappropriate behavior against him in June of 2020. An email was sent to the school detailing the allegations of 15 young men who claimed the teacher had behaved inappropriately. The school notified the Joliet police and worked with the Diocese on an investigation. The police could not support the third-party allegations as they had no witnesses or victims at the time. Nevertheless, Mr. Hylka was put on leave from Joliet Catholic and resigned from his teaching position as a result.

Despite this history, and the fact that he did not meet the requirements of the diocese to be a full-time teacher, the principal of Saint Joseph Catholic School in Lockport hired Mr. Hylka as a teacher for the start of the fall 2020 school year. He obtained a substitute teaching license in January 2021 but was not enrolled in a teacher preparation program, which is required by the diocese to continue teaching in a full-time position. The principal at the school, Lynne Scheffler, has now been placed on administrative leave while church officials investigate how Mr. Hylka was hired.

Unfortunately, this is not the first time that the Joliet Diocese has been embroiled in a sex abuse scandal. In 2018, they reached a $1.4 million settlement with three men who allege that they were molested by a diocesan priest as children. In 2015, they settled similar claims by fourteen other men for over $4 million. And a separate report has named 43 different Joliet priests who allegedly abused parishioners.

The Diocese of Joliet must do a better job of protecting children from predators. Its history shows that it has ignored and covered up this issue in the past, and the current situation with Mr. Hylka shows that the diocese has not learned its lesson. Hiring protocols such as background checks are in place for a reason: to protect vulnerable children. There is no excuse for not following them. We call on the Diocese to implement any changes necessary to make Catholic schools and churches safer for children.

We encourage any abuse survivors to call the Joliet Police Department at 815-724-3020. And we stand ready to help you in your search for justice, accountability, and healing. Please reach out to us for a confidential consultation if you believe a lawyer can help.

The attorneys at The Collins Law Firm represent victims of sexual abuse by coaches, teachers, and other trusted figures. We understand the sensitivity of these situations and the emotional devastation caused by the abuse. It is our mission to treat abuse survivors with the dignity and respect they deserve while holding the individuals and institutions involved accountable for their failure to protect children.