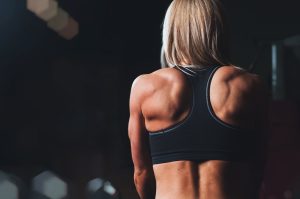 We’re inching closer to that time of year when everyone starts making New Year’s resolutions to hit the gym more. If you’re one of those people, you should make an additional resolution to only buy sports bras and athletic shirts that don’t contain BPA, a dangerous hormone disruptor.

Recent testing by the Center for Environmental Health (CEH) has discovered that 14 different brand-name companies are selling sports bras and athletic shirts that contain up to 22 times the safe limit of BPA (also known as bisphenol A). The brands affected include:

CEH has sent legal notices to all the above companies; they have 60 days to remedy the problems before a complaint is filed against them. So far, the only company to respond publicly to the notice is The North Face, which says they are aware of and are investigating the allegations made by CEH.

The test results from CEH are extremely concerning. BPA is a toxic chemical that mimics estrogen. It disrupts the way our bodies make hormones and has been linked to several harmful health effects. Below is a list of potential health consequences of BPA exposure:

BPA can be absorbed through the skin in minutes or even seconds and enter the bloodstream. So, wearing clothing that contains BPA, especially sports bras or shirts that are meant to be worn for hours while you are sweating in them, could mean a lot of exposure over extended periods of time.

For now, you may want to avoid athletic clothing made by the above brands until they remove this toxin from their products. At a minimum, you should wash your sports bras in cold water and line dry them to avoid the heat that causes BPA to leach. Better yet, choose sportswear made of natural fibers, since BPA is typically found in polyester and spandex. Why wear clothes that contain dangerous toxins when they are supposed to help you stay healthy?