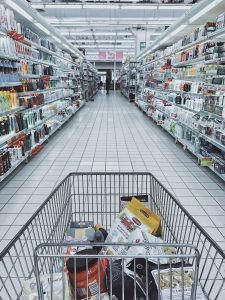 Millions of Americans are ordering their groceries online and then picking them up at the store. Major grocers like Walmart are encouraging the trend, making curbside pickup the norm.

While curbside pickup grows, so does grocery delivery. Companies like Instacart and Shipt, as well as traditional grocery stores like Walmart and Aldi, are offering grocery delivery straight to your home.

Many of the drivers who are delivering for Instacart and other delivery services may not have insurance in the event that they cause a crash. This means that even though an Instacart driver is on the job, that driver may not be able to compensate you for your injuries and medical bills.

Instacart Does Not Insure Their Drivers

This means that many grocery delivery drivers may only be carrying $25,000 in insurance coverage to cover bodily injury. Medical treatment, lost wages, and disruptions to your life can easily exceed $25,000 in the event of a crash.

Personal Insurance Policies May not Apply

Another potential problem is that individual drivers’ automobile insurance may refuse to cover any “commercial driving” activities. Most personal auto insurance policies have exclusions for hauling around people or items and being paid for it. If the Instacart driver’s insurance finds out that the driver is using his vehicle for commercial, instead of personal, purposes, the insurance company can refuse coverage. This means that in many cases there may no insurance coverage at all if you’re the victim in a crash with an Instacart or Shipt Driver.

Instacart May Be Held Liable

Companies like Instacart often try to avoid legal responsibility for the accidents caused by its representatives by labeling them “independent contractors”, a title that suggests the company played no role in the conduct that caused the accident. Sometimes this strategy works; sometimes it doesn’t.

If you are the victim of an accident caused by an Instacart driver, an experienced accident attorney can help you determine if there are ways to avoid this “independent contractor/no company liability” shield.  Among the issues that your lawyer will investigate is how carefully the company hiring the grocery delivery driver considered that driver’s record. For example, did the company learn if the driver had a previous bad driving record; alcohol/drug abuse in his/her driving record;  or anything else that suggested the driver may present an unreasonable risk to other drivers on the road, or pedestrians?

Big Box Stores May Have Insurance

Stores like Walmart and Aldi are also delivering groceries. These stores use their own employees to deliver groceries – not independent contractors. Because the drivers are actual employees of the business, the big box store’s insurance will most likely cover them in the event that they cause a crash.

Your Uninsured and Underinsured Motorist Coverage May Cover the Accident

The most important thing you can do to protect yourself is to purchase uninsured and underinsured motorist coverage (called UM/UIM coverage). UM/UIM coverage is part of your own insurance that is available to you to pay medical bills, cover lost wages, and compensate you for your injuries if you are in a crash with a driver who is not insured or does not have enough insurance to cover your injuries. We recommend that drivers carry between $100,000 and $250,000 in uninsured or underinsured motorist coverage to protect themselves. If you are getting any resistance from your insurance company regarding an Uninsured or Underinsured motorist claim, we may be able to help.

If you have been the victim in an accident involving an Instacart or Shipt driver, our auto accident attorneys may be able to help. Call us at (630) 527-1595 for a FREE consultation.