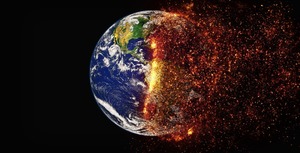 The world is heading for a potential climate catastrophe and a recently released report has unmasked the biggest corporations responsible. The report entitled “Carbon Majors: Accounting for Carbon and Methane Emissions 1854-2010”, by researcher Richard Heede, “offers the most complete picture to date of which institutions extracted the fossil fuels that have been the root cause of global warming since the Industrial Revolution.”

In other words, this report lists which corporations are responsible for the majority of the carbon dioxide emissions that are fueling climate change. It’s obvious that energy corporations would be on this list. What is surprising is how few corporations can be responsible for so much. A full 63% of carbon dioxide emissions since the 1850s can be traced back to only 90 of the largest fossil fuel and cement producers in the world. Predictably, the United States accounts for a large share of these corporate giants. Among the nefarious 90 are the 21 American corporations listed below:

Faced with this report, we can no longer deny that the fossil fuel industry is in large part to blame for the carbon dioxide emissions that are wreaking havoc on our climate. So, now that we know the culprits, what are we prepared to do? Why aren’t we confronting these fossil fuel companies in time to prevent catastrophic global warming? Why aren’t we committing to finding clean alternatives before it’s too late? Why aren’t we doing SOMETHING?

Our environmental policies have been hijacked by the two most famous climate deniers in the world, President Trump and Scott Pruitt, who also happen to be in bed with the fossil fuel industry. Trump and Pruitt-who apparently love “fake science” as much as “fake news”– have decided that they don’t believe that our carbon dioxide emissions cause climate change or even that climate change really exists. Furthermore, because of that stance, they have pulled the United States out of the Paris Climate Accord, the world’s biggest effort to date to turn back the tide on climate change.

The rest of the world understands the danger.

But not these two.

They have forfeited the right to make these decisions for us.