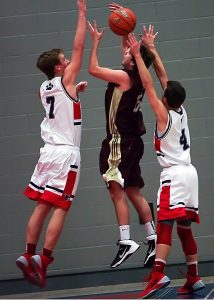 With soaring popularity in youth basketball, injuries are on the rise. Basketball is not typically associated with concussions and other traumatic brain injuries, but surprisingly those injuries are more common in basketball than many other sports.

According to the Journal of Pediatrics, basketball accounted for more than 9 percent of concussions among athletes aged 8-19 who participated in youth sports, placing it in second place just behind football at 22%. Soccer ranked third, at 7.7 percent, followed by hockey and baseball, at just under 4 percent each.