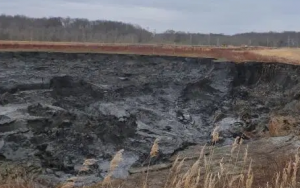 Illinois’ Coal Ash Pollution Prevention Act is definitely a step in the right direction for protecting communities and the environment. It will hopefully result in stronger rules for coal ash cleanup, as well as fund cleanup programs through permit fees. The Act also requires performance bonds to ensure that companies set aside the money to close and clean up coal ash ponds. Illinois desperately needed this law, since a recent report found widespread heavy metal pollution in the groundwater surrounding 22 of the state’s 24 coal ash dumps, including arsenic, cobalt, and lithium pollution. Luckily, now that the bill became law, the Illinois Environmental Protection Agency (IEPA) can begin proposing rules to regulate coal ash disposal. That rulemaking process will allow community members to comment on what IEPA proposes. (Want to leave an effective comment? Learn how here.). Hopefully, the IEPA will stand up for impacted communities by proposing and implementing strict rules on coal ash disposal.

Now that Illinois is taking great strides to reduce coal ash pollution, it’s time for the federal government to follow suit. The U.S. EPA recognizes that coal ash contains dangerous contaminants that, “without proper management…can pollute waterways, groundwater, drinking water, and the air.” However, instead of cracking down, the EPA’s latest amendment to the coal ash regulations gives the coal industry a break, including relaxing shut down requirements when a coal ash disposal site is leaching. This is unacceptable! It is time for the federal government to step up and start protecting people and the environment.

Even though Illinois is heading in the right direction, many people are still at risk of illness associated with coal ash contamination. If you believe you or your family has been impacted by groundwater contamination from a coal ash dump, please call our environmental attorneys for a free and confidential consultation at 630-527-1595. Our legal team can help you determine if you have a case.